The United Arab Emirates, commonly known as UAE, has emerged as one of the world’s biggest commercial hubs. The UAE is home to hundreds of multinational corporations today. Acting as a worldwide marketplace for traders and businesses of all scales, the UAE owes its rapid growth to several factors, such as its natural oil resources, an open economy, business policies drafted by its leaders, etc.

The United Arab Emirates implemented many administrative and legislative reforms by introducing federal law no. 32 of 2021 on commercial companies as a vital feature of the legislative changes with a central Idea of promoting the UAE as a hub for foreign direct investment.

There are various aspects of the new commercial companies law you should know and understand if you want to conduct business or are a part of a company in UAE. Although these company laws can be complex and sometimes confusing, we at Legamart guide you through the complexities of the new law.

The New commercial companies law has come into effect since second January 2022, replacing federal law No. 2 of 2015 entirely and also codifying certain amendments made to the old companies law over the years. The new law brought about several changes, and all companies were given a transition period of 1 year to comply with the changes that had been introduced.

During this one year, the companies have to assess the results of the new companies law and update their constitutional documents with respect to it by 2nd January 2022.

The fundamental changes that have been introduced in the New Commercial Companies Law of UAE are as follows:

The UAE New Companies Law that came into force on 2nd January 2022 allows foreign nationals to have 100% ownership in onshore companies. The amendment abolished the requirement for companies to have an Emirati shareholder or agent. The company ownership and foreign investments provisions are already incorporated into Federal Law No. 26 of 2020. However, federal law No. 32 of 2021 codifies these previous amendments.

In addition to the changes mentioned above, the new commercial companies law no longer requires companies to have a UAE national or a local company as registered agents. With the previous requirement of 51% shareholding of a UAE national gone, foreign investors can now fully establish a business in UAE, of course, except for certain “Activities of Strategic Effect.”

A special purpose acquisition company is a company with no ongoing commercial operations. It is formed solely for raising capital through an IPO or acquiring or merging with an existing company. These are also known as blank check companies and have existed for quite some time.

The new commercial company law gave a legislative basis to the SPACs in the Emirates. Although SPACs have been popular in other parts of the world, such as the USA, as means to raise capital, etc., it was only after the introduction of new companies law that they were introduced in UAE.

The new commercial companies law defines these special acquisition companies as public joint stock companies (PJSCs). They have been approved by the securities and commodities authority has approved only for the purpose of mergers and acquistions of companies in UAE while also serving as another option to facilitate M&A activity such as foreign investments.

This signifies the commitment of the UAE to be a part of the growing overseas trend of IPOs, which is carried out using SPACs. Also, although the SPACs have been recognized and initiated by the new law, they are still exempted from it. They, therefore, are subject to separate regulations which were issued earlier.

The new commercial companies law recognized the onshore special purpose vehicles for the very first time. The SPV is a type of company that exists to split the obligations and assets related to some specific financing operation of the parent entity or the obligation and assets of the person who incorporated it for any reasons such as credit operations, borrowing, securitization, issuance of bonds, etc.

Similar to SPACs, SPVs fall under the new companies act but are governed by separate regulations issued by the SCA.

The introduction of SPACs and SPVs is expected to stimulate transactions in the corporate and financing sectors by allowing greater flexibility in structuring and aligning the UAE with structures available to investors and financers in other developed jurisdictions.

A limited liability company is a form of a business structure that originated in the USA to protect the owners of the said company from any personal responsibility for the company’s debts.

Powers of the Manager

A manager’s time in office may be prolonged by up to six months from the expiration date of their term or until the impending appointment of a new manager in cases where they have not been replaced.

Memorandum Association of the Company

The memorandum association of a company that represents its charter. It is a legal document that is prepared to define the relationship of the company with its shareholders and the objectives behind the formation of the company.

In terms of public joint stocks companies, a number of changes have been adopted and codified through federal law No.32 of 2021. They are:

Discount in the Issuing of the Shares

If the market value is less than the nominal value, PJSCs can now issue shares at a discount to the nominal value. This is subject to SCA approval and the company establishing a special reserve equal to the discount amount and funding the shortfall from future profits before dividend distribution.

Remuneration of the Directors

Founders’ subscription shares on an IPO were subject to a minimum (30%) and maximum (70%) caps under the old companies law. These mandatory caps have now been removed. Founders can now subscribe for shares in the proportions specified in the prospectus, subject to any SCA requirements.

The legislative reforms introduced to the UAE on its 50th birth anniversary and the Federal Law No. 32 of 2021 indicates the willingness of the emirates to participate and compete with the west in business and commerce. The New Commercial Companies Law is focused on attracting foreign investors and giving them freedom while conducting business in the Emirates. As an Entrepreneur or part of a company, you need to have a relevant understanding of the commercial company laws to conduct your business smoothly. In case the laws seem confusing or you need guidance, you can consult the expert lawyers at Legamart and get the required legal aid. 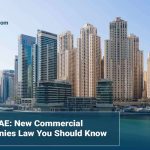