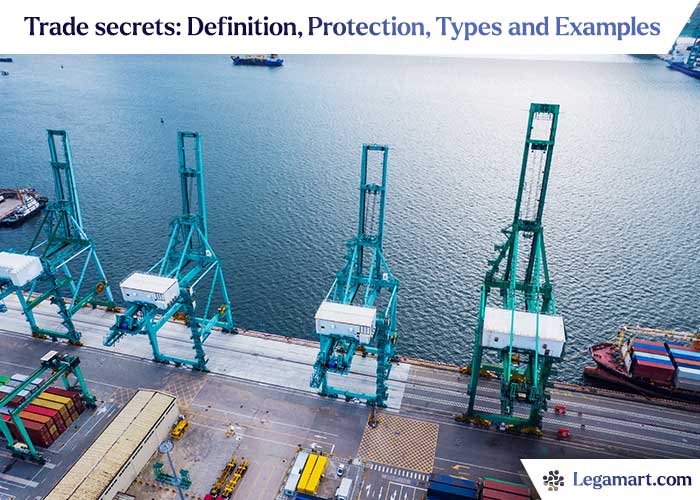 Trade Secrets, What is it?

The main difference between Trade Secret and Patent is: Trade secrets derive their legal protection from their inherently secret nature. Patents, on the other hand, can only be protected through public disclosure. The patent application process is lengthy and costly.

The USTA Defines a “Trade Secret” as:

Trade secrets may take a variety of forms, such as a proprietary process, instrument, pattern, design, formula, recipe, method, or practice that is not evident to others and may be used as a means to create an enterprise that offers an advantage over competitors or provides value to customers. Trade secrets are defined differently, varying from jurisdiction to jurisdiction, but should all have the following characteristics in common to qualify as being a trade secret. They must not be public information. Their secrecy ensures an economic benefit to their holder. Their secrecy is actively being protected.

In some jurisdictions, trade secrets are also known as confidential information. This confidential information is very significant for the business world. It is similar to top secret documents of the government that are guarded by the governmental institutions. In the United States, trade secrets are defined and protected by the Economic Espionage Act of 1996 and also fall under state jurisdiction. As a result of a 1974 ruling, each state may adopt its own trade secret rules.

The Federal Law Defines Trade Secrets as “All forms and types of…” the following information:

All the financial, business, scientific, technical, economic, and engineering information can be defined as types of trade secrets, and this can also include patterns, plans, compilations, program devices, formulas, designs, prototypes, methods, techniques, processes, procedures, programs, and codes. Different jurisdictions deal with trade secrets differently. Some consider them property, while others have declared them an equitable right.

Can a Trade Secret be Patented?

How Long Does Trade Secrets Last?

As defined in WIPO website, trade secret protection is not limited in time (patents last in general for up to 20 years). It may continue indefinitely as long as the secret is not revealed to the public.

What are the Examples of Trade Secrets?

There are many famous and real life examples of trade secrets. The secret ingredients for KFC’s original recipe were originally kept in Colonel Sanders’ head. He eventually wrote the recipe down, and the original handwritten copy is in a safe in Kentucky. Only a few select employees know the recipe, and they are bound by a confidentiality agreement. Similarly, the secret formula for Coca-Cola, which is believed to be locked in a vault, is a perfect example of a trade secret that is a formula or recipe. Since it has not been patented, it has never been revealed.

Listerine is a popular example of a trade secret used in law schools. The inventor licensed the secret formula to Lambert Pharmaceuticals. Lambert (now Pfizer) made royalty payments to the inventor’s family for over 70 years, even though the formula was revealed during that time.

Pfizer tried to stop payments after paying over $22 million for a formula that was no longer secret. It sued, saying it was no longer responsible for licensing fees. The court ruled that the contract did not stipulate that payments could be stopped if the trade secret was legitimately discovered by others, especially since Pfizer had acquired the formula when it was still secret and derived competitive advantage from it.

The special sauce recipe was a trade secret, so secret it got lost in the 1980s during reformulation. Nobody noticed it missing until an executive wanted to bring the original back. Fortunately, McDonald’s was able to retrieve the recipe from the original person or company that originally produced the sauce, as the recipe was still in the records.

The Competitive Advantages of Trade Secrets in a Free Market

Some of those secrets are no longer secrets, but still function as marketing devices. Other secrets would probably seem very mundane if revealed to the public.

Tips For Businesses to Protect Their Trade Secrets

Identify each piece of information that you wish to protect and create a system of identifying newly created material that requires secrecy. When selecting, try not to be too inclusive because this might trivialize the protection of trade secrets.

Documents that contain or reflect trade secret information should be labeled “confidential.” Limit copies and circulation of these documents and, when necessary, number copies and require the documents be checked in and out.

Conduct an information audit to determine where vital information is stored and who has access to it. Include all hard copies, desktop and laptop computers, and diskettes. Look for potential weak spots.

Require passwords for access to computers containing sensitive information. You’d be amazed how many laptop computers are stolen each year. Visa International even had a desktop computer stolen that contained confidential information on thousands of credit card accounts.

In contracts with outside entities, including a strict confidentiality provision regarding the trade secrets. When outsourcing production of your products, try to choose different vendors for different parts. Do not disclose the final product or the relationship between the pieces.

For a smaller business, perhaps a locked filing cabinet is enough security. Bigger companies might need security officers, secure zones, and badges. Curb public tours and require that all visitors sign in.

Understand that not all countries respect US policies protecting trade secrets. If you are conducting business internationally, be very careful to whom you disclose information.

Require that all employees who will be working with trade secrets take training and sign a non-disclosure agreement and a company policy regarding protection and proper handling. Provide refresher courses. If information is mishandled, let the employee know and take disciplinary action if needed. Hold exit audits with employees leaving the company, requiring them to return any trade secret materials and reminding them of their non-disclosure agreement.

Trademarks aren’t usually considered trade secrets because they are visible to all, like logos and website graphics. The protection of a copyright or patent is different from the protection you would give a trade secret because copyrighting or patenting the trade secret makes it known to the public.

For example, if you develop an app that evaluates potential customers in a new way, you could keep it within your company as a trade secret, or you could patent it and sell it. There’s no time limit on keeping a trade secret, except that it might be stolen. Patenting the app helps you to make your case in filing a lawsuit against someone you think has stolen it.

The first thing you should do if you think a trade secret has been stolen is to get the help of an attorney to get you an injunction. An injunction is a court order for someone to stop doing something, like using your trade secret for profit. This is called “injunctive relief” because it relieves or minimizes the injury to your business from the theft. An injunction may be temporary while the legal process is going forward, or it might be permanent, depending on the circumstances.

Once you have limited the damage with an injunction, you and your attorney can start to take legal action against the theft. The unauthorized acquisition, use or disclosure of such secret information in a manner contrary to honest commercial practices by others is regarded as an unfair practice and a violation of the trade secret protection.

Companies should inventory their trade secrets, utilize all reasonable means to preserve them, and examine the various legal tools to safeguard these precious assets as trade secrets become more relevant in the corporate sector, the legal community, and society at large. LegaMart is your assist in your legal issues.

Here is another article related to trade secrets which you may find useful: