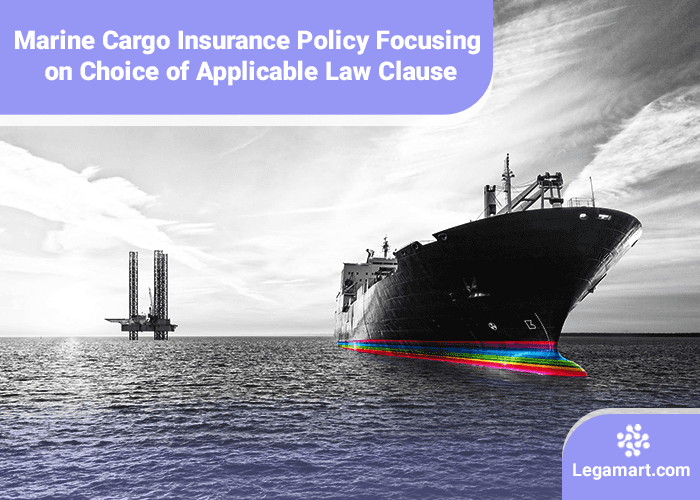 A big pharma company made a name for exporting its medicines to other countries. All the shipments were transported safely, but during the unloading of the last assignment, the ship caught fire leading to losses of millions of dollars. The management wastes time thinking about how they could have prevented such a situation. Better ship? Better fire equipment? But all that was necessary was a marine cargo insurance policy.

So, marine cargo insurance is a category of property insurance that insures belongings while in transit against loss or damage occurring from perils associated with the navigation of the sea or air and succeeding land and inland channels.

‘Maritime perils’ can be defined as perils resulting from or incidental to the transportation of property by the sea. It incorporates perils of the sea (sinking, stranding, collision, etc.), fire, war perils, pirates, thieves, capture, jettison, washing overboard, and any other perils either of a like type or which may be established by the policy.

If the question arises as to what comes under the purview of property here regarding marine cargo insurance policy?

The answer is absolutely clear. It can be anything that is in the operation of being transferred from one place to another. It usually consists of raw materials and components from the assured or finished products.

The genre for this type of property is ‘Goods and or Merchandise,’ which indicates traded goods. Also, items of the assured’s equipment can be insured, for example, machinery, office furniture, samples, engineers tools, and exhibition materials. Under a marine cargo insurance policy, almost anything that can be moved and insured can be covered.

What are the Essential Clauses in a Marine Cargo Insurance Policy?

This clause stipulates that compensation will not exceed the amount stated in the policy in case a casualty or damage occurs.

‘At and From’ Clause

This clause deals with conditions referring to the time when risk begins. In this clause, the risk coverage starts when the ship is tied up at its departure port until it leaves the port. If the marine cargo insurance policy declares the words ‘at and from ABC, it means the risk is covered when the ship is at ABC port and when it departs from the port. This clause applies to Hull and Freight Insurance.

This clause deals with the situations facilitating the insured and the insurer in attempting to save the subject- matter of insurance from any loss. If the insured spends funds to protect the goods from an upcoming loss, they can retrieve this amount from the insurer. The action of saving the subject matter on undervaluing the loss does not lead to deviation, and the contract will not be invalid.

This clause deals with the situations where the necessity arises in order to protect the risk associated with the storage of the shipper or consignor to the storehouse at the destination. If the cargo is to be carried from the land to the port, then the marine cargo insurance policy will cover the risk at land and sea.

The risk involved in taking goods to the port from the sender’s warehouse to the appearance of goods at the receiver’s warehouse is covered. This clause protects the shipper from a ton of trouble, and they are certain the subject matter will safely reach the warehouse and port.

This marine cargo policy specifies the elements of voyage, ports of departure and arrival, and route to be followed by the ship. If the ship deviates from its course, the insurer will be released of liability. Later, if the ship alters its original route and observes the same route, it will be accepted as a deviation. The insurer will not be responsible for indemnifying the loss if the original course is modified.

This clause deals with cases where losses caused by negligence of the master or a crew member are also protected. In this clause, damage to the cargo caused by loading and unloading operations is also recoverable.

Fun fact, this clause was inserted after a famous lawsuit involving a ship named ‘Inchmare’ in 1857. This ship sustained damages due to the crew’s carelessness, and the insured could not get the claim for damages because there was no coverage under the ‘perils of the sea.’ Afterward, it began to get included as a crucial clause in future insurance policies.

This clause deals with the situations when the need arises to toss out particular cargo to lessen the weight load on a ship in case of any crisis. It is imperative to steer clear of marine peril. The jettisoning must be done intentionally. The ship’s master decides what kinds of goods to toss overboard. The loss incurred by jettisoning is protected under the general clause.

This clause deals with the situations where perishable goods are the subject matter of insurance. The memorandum clause is utilized to save the insurer from settling undersized losses for perishable goods. Under this clause, the insurer is not accountable for partial losses. In certain commodities, this loss is allowed up to 50%. However, if there is a widespread loss or the ship is abandoned, the insurer will be responsible bear the loss.

Let us talk about the ‘Choice of Law clause’ in depth. The parties have the freedom to choose the law that will be applied in the contract (the proper law of the contract, the applicable law). It is essential because the companies manufacturing goods or services have the preference to pick the choice of law in a shipping contract. Although, the consumer may not consent or may not even be aware in some cases of any choice of law clause subject to the law of another nation.

The choice clause of law in the contract is essential to provide legal certainty in resolving disputes between the parties.

When it comes to the validity of such a clause, the choice of law (the law applicable to the contract) is a classic issue that never ceases to be a contentious issue. In a landmark judgment, it was held that the jurisdiction clause in a marine cargo insurance policy was not binding on a third party in respect of a direct claim brought against the insurer.

The question raised in this case was whether a third party entitled to bring a direct action against a liability insurer is bound to the jurisdiction between both parties, which has caused harm to another third party.

The marine cargo insurance policy included an English choice of law and an English jurisdiction clause. The court, however, ruled that a jurisdiction agreement between an insurer and an insured party could not be enforced against a victim/third party who wishes to bring an action directly against the insurer.

A deep study of this case shows that there is always an imbalance between the parties one is more powerful than the other, usually the insurance companies. It was one of the first cases to question the applicability of a jurisdiction clause concerning a direct claim against an insurer.

A law chosen by one party may not necessarily be accepted by another. There are numerous reasons whether the court will apply the choice of law or not. Therefore we can rightly declare that the issue of choice for this law is still a controversial matter.

If the loss has been rendered due to a mixture of various perils, and one or more of these perils does not fall under the insurance, the loss shall be administered over the particular perils according to the impact they may have had on the happening and size of the loss, and the insurer shall only be responsible for that part of the loss which is attributable to the perils protected under the insurance.

The situation cited in the introduction may be hypothetical, but to prevent this situation from happening in real life, all that is needed is good marine cargo insurance policy. It is an essential expense that will safeguard your goods and offer protection against calamities. Hence, it is important to remember that if you do not opt for marine cargo insurance policy, you will leave your goods open to theft, loss, and damage.

Marine cargo insurance covers a diverse and wide range of niche areas, which require a thorough understanding of the marine sector and experience. The more important this law is, the harder it is to find experienced marine lawyers, but we at Legamart have a wide range of marine lawyers to listen to your issues and find a solution. Visit our LegaMart directory to learn more!