6. Regulation of the Minister of Agrarian and Spatials / Head of National Land Agency of the Republic of Indonesia No. 29 of 2016 regarding Procedures for Giving, Release, or Transferring Rights on the Ownership of Dwelling of Residency House by Foreign Persons Domiciled in Indonesia (“MR 29/2016”);

7. Indonesian Government Regulation No. 103 of 2015 regarding Ownership of Dwelling of Residency House by Foreign Persons Domiciled in Indonesia (“GR 103/2015”);

In the beginning, Indonesia only recognized the Marriage Agreement, which was made at the time or before marriage. Whereas if a marriage has occurred, the marriage agreement cannot be held again. This is contained in Article 29, paragraph (1) of Indonesian Marriage Law, which stipulates as follows:

“At the time or before the marriage takes place, both parties for mutual agreement can submit a written agreement that is ratified by the marriage registrar or notary, after which the contents also apply to third parties as long as the third party concerned”.

However, this provision is no longer valid based on the Constitutional Court Decision on Marriage Agreement which has changed it to the following:

“At the time or before the marriage takes place or during the marriage, both parties for mutual agreement can submit a written agreement that is ratified by the marriage registrar or notary, after which the contents also apply to third parties as long as the third party concerned”.

So that currently, Article 29, paragraph (3) and paragraph (4) of the Indonesian Marriage Law are as follows:

Article 29 paragraph (3) of Indonesian Marriage Law “The agreement came into effect since the marriage took place unless otherwise specified in the Marriage Agreement”.

Article 29 paragraph (4) of Indonesian Marriage Law “During the marriage, marriage agreement can regarding marriage assets or other agreements, cannot be changed or revoked, except if both parties have an agreement to change or revoke, and the change or revocation is not detrimental to a third party”.

As based on that Constitutional Court Decision on Marriage Agreement, Indonesia is now familiar with the Postnuptial Agreement, which is a written agreement made by a married couple during their marriage, which can regulate marriage property or other agreements, and can be changed or revoked based on the agreement of the married couple as long as the change or revocation does not harm third parties.

According to the applicable law in Indonesia, a Marriage Agreement can regulate among other things the separation of Joint Property.

For mixed-marriage couples, it would be great if they had made the previous Marriage Agreement Separate Assets.

Basic rights that can be lost include land ownership rights, where the Indonesian citizen cannot have the highest and most complete rights to land in Indonesia, namely Hak Milik. So that if he has land with a Hak Milik status, he is obliged to release it or reduce his ownership status. This relates to one of the principles or principles in the land law that apply in Indonesia, namely the principle of nationality.

Therefore, the only way Indonesian citizens who are married foreigners can still have ownership rights to land in Indonesia is by separating the Joint Property and the form of a Marriage Agreement.

To the best of our knowledge and experience, a Marriage Agreement (Postnuptial or Prenuptial Agreement) may bring benefits for Mixed-Marriage Couples, among others:

2. Avoid unnecessary costs in the future: If most of the legal issues are covered by a marriage agreement, the couple may be able to avoid costly litigation in the future;

3. Protection of Property: Marriage agreements help define which items of property each partner will be entitled to in the event of divorce or separation;

5. Debts Liability Distribution: Marriage agreements can also determine how liability for debts will be distributed between the partners. The agreement can also help protect each party from issues with creditors.

Some legal aspects related to the making and implementation of Marriage Agreements, among others, are as follows:

1. In the event of Death of the Indonesian Partner then The Foreign Partner will not lose his right to remain stay in Indonesia under his/her Limited/Permanent Stay Permit (KITAS / KITAP remain valid) (Article 160 of GR Immigration 31/2013);

2. The Foreign or Surviving Partner must have another Indonesian Citizen as his/her Guarantor (sponsorship);

3. In the event of Divorce, the Permanent Stay Permit of the Foreign Partner remains valid if he/she elect another Indonesian Citizen as his/her Guarantor (sponsorship) (Article 162 of GR Immigration 31/2013).

1. In the event of Death of the Indonesian Partner then the Foreign Partner (and the Children) will not lose the right to claim his/her heritage (Article 852 of Indonesian Civil Code);

2. If the heritage is in the form of property/land ownership then he/she must release or transfer the rights within one year;

3. If he does not release or transfer his rights within a year, then it will belong to the state (Article 21 (3) of Agrarian Law). However, this condition may be challenged by a Will or Testament from the Indonesian Partner.

1. Separation of Joint Property must be stated in a Marriage Agreement which is made in the form of a Notarial Deed and in Indonesian and meets other procedural requirements;

2. It is important to note that the Marriage Agreement cannot be treated as a Will;

3. The Marriage Agreement then must be registered to the relevant and competent marriage registrar; and

4. The registration process will take about two weeks, and after that the marriage registrar will provide a Written Statement on the back of the Marriage Certificate which stating about the presence of Postnuptial Agreement in their life.

If you want to know more about this or want to discuss any issues regarding marriage agreements in Indonesia, we recommend you take advantage of LegaMart’s quick meeting feature, where you can choose an experienced family lawyer from the list of 2000+ lawyers from various domains and countries and get your queries answered in no time. 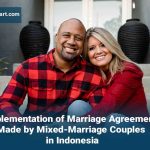